What Is A Dental Implant?

Definition of a Dental Implant

The Glossary of Prosthodontic Terms defines an implant as “a prosthetic device or alloplastic material implanted into the oral tissues beneath the mucosal or/and periosteal layer, and/or within the bone to provide retention and support for a fixed or removable prosthesis.”

Dental implant is a root form, shaped like a threaded screw that serves as replacement for the root of a missing natural tooth, or many teeth, or to support a  complete removable denture. It is made of  commercially pure titanium, Cp Ti, or a titanium alloy, Ti-6Al-4V, 90% titanium, 6% aluminum and 4% vanadium. Titanium is used because it is a common lightweight non-noble base-metal that is corrosion resistant due to the formation of a surface oxide. 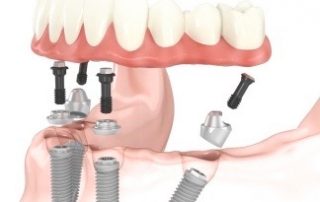 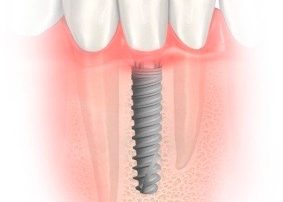 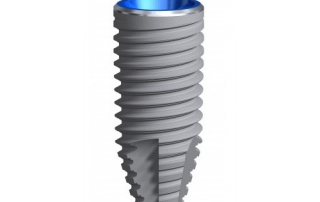 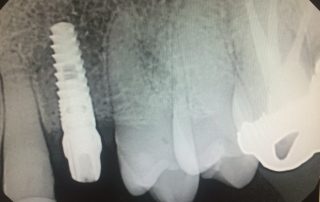 Endosseous or endosteal implants are the most common type of implant. They are placed in the jaw bone. The bone cells grow onto the threads of the implant or osseointegrate making the implant an excellent anchorage as a root of a tooth.

Endosseous Titanium implant was first experimented by Professor Per- Ingvar Branemark and colleagues in 1952.

Implant dentistry has been evolving with new techniques, materials, and devices. Successful clinical applications and satisfaction from patients make implant a predictable therapy in a shorter time such as in immediate/early implant placement and prosthetic.

Titanium Implant has also been used in many applications such as in disfigured face and body reconstruction for severe trauma situations with evolving state-of-the technique, materials, and devices since the early 1950s.

Subperiosteal implants are placed under the gum but on, or above, the jawbone. This type of implant may be used in patients who have a shallow jawbone and cannot or do not want to undergo a procedure to rebuild it.

Dental implants also come in different sizes and heights, including standard and narrow (mini). Your dental implant expert Dr. Nguyen is specialised to help you determine what option is right for you, depending on the tooth or teeth that need to be replaced.

We use the best implants in the market – Nobel Biocare Branemark and Straumann.

TiUnite from Nobel Biocare is a unique implant surface that enhances osseointegration – even under the most challenging conditions including soft bone and immediate loading. TiUnite is a thickened, moderately rough titanium oxide layer with high crystallinity and a high phosphorus content. Read more here – TiUnite implant surface – proven to perform and here – TiUnite – a unique biomaterial.

How Titanium Dental Implants Are Made

Here is a video explaining the process –

The platelets begin to swell and form pseudopodia. By releasing adenosine diphosphate (ADP), they get sticky and clump together, closing the injured blood vessels at the wound edges to stop the bleeding.

The newly formed fibrin matrix allows the blood to clot. Activated platelets become embedded in the matrix and release granules full of enzymes and growth factors needed for wound healing and bone formation.

Blood cells, activated platelets and fibrin form a blood clot that adheres to the moderately rough TiUnite surface. It is crucial for contact osteogenesis that the blood clot remains attached to the surface.

Neutrophils and, later, macrophages, remove the blood clot during the first two days of wound healing. Osteogenic cells stream to the TiUnite surface and migrate to the front of the forming bone. Here, they turn into osteoblasts.

Newly formed bone spreads over the osteoconductive TiUnite surface and forms a thin band of woven bone deposited directly on and along the surface. This thin bone layer will grow by further bone apposition and turn into lamellar bone.

Bone forming osteoblasts attach to the TiUnite surface and cover the orifices of the open pores. They start to secrete the collagen matrix of woven bone directly into the pores and move away from the surface. This forms the collagenous bone matrix which will eventually mineralize.

Newly formed bone crosses the gap between local bone and implant by distance osteogenesis. When the bone reaches the TiUnite surface, it spreads over it by contact osteogenesis, characterized by woven bone deposited directly on and along the surface.

Grooves added to the threads of the implant promote initial bone formation. Bone grows in a spiral-like fashion along the grooves before spreading laterally over the entire TiUnite surface.

During drilling bone fragments are generated and accumulate in the osteotomy, especially in the apical region. In this area, they serve as nuclei for bone formation by guiding osteogenic cells through the wound and towards the TiUnite surface.